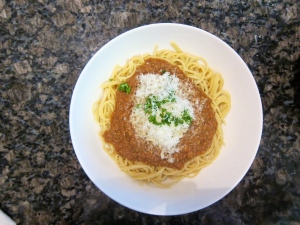 Yeah, I know.  Who can’t rustle up a spaghetti bolognaise in an hour?  I decided to make this one after I lent my foodie neighbour my thermomix for the long weekend.  We were going away, and whilst I usually take it with me on trips, I didn’t think I need it.  So – she had three days of possessed Thermomixing, and this is one of the things she made.  She hadn’t eaten it when she dropped off my thermomix, and I couldn’t wait to hear, so I made it myself!

What appealed to me most about the recipe was the ‘hidden’ vegetables.  Because we’d had a long weekend of eating food that wasn’t so healthy, I needed to get some vegetables into my 3 year old, who seems to have an aversion to any green vegetable known to man. And he loved it – ate it all up, without complaint. What a champion!

So, I whipped to the supermarket to buy the meat – not my first preference in the meat stakes, but there you have it.  I was on a mission!

What I first noticed after I’d made it was just how much it made – I’ve been able to freeze some for solo dinner nights and quick meals for my son.  I think it must have to do with the meat that you mince yourself in the thermomix – 500 grams in total – and I’m sure it made more sauce than I usually get with a kilo of supermarket or butcher shop mince.  No doubt it’s because you can choose what goes into it, and make sure it’s trimmed of all the fat. I just love that about the thermomix.

The star anise and the orange make a nice change to the usual tomato overload you can get with bolognaise.  I’ve got to say, it tasted great – if not unusual to me – at first.  But, it was lovely, and, as is the case with so many things, tasted even better the day after!

I don’t think there are many tips for this recipe – aside from cutting the carrot and celery into a few more pieces than three.  I actually used a couple of smaller carrots rather than one large, and maybe it was that that impacted the chopping of the carrot and celery.  Even after the 3 seconds plus 1 second, I still had quite a few large chunks, so I blitzed again for a second and then fished out the remaining chunks.

I served with the recommended parsley and Reggiano Parmesan.  While it didn’t look as impressive as the beautiful picture in Dani’s book, it wasn’t too bad!  I used spaghetti for the grown ups, and served my son the same sauce with mini penne, which he loves.

Just as an aside, I cooked the pasta the traditional way, in a saucepan on the hob.  I have done it in the thermomix in the past, but I find that longer pastas – spaghetti, fettucine and the like – tend to get a bit wound up and can be a pain to get out of the thermomix bowl.